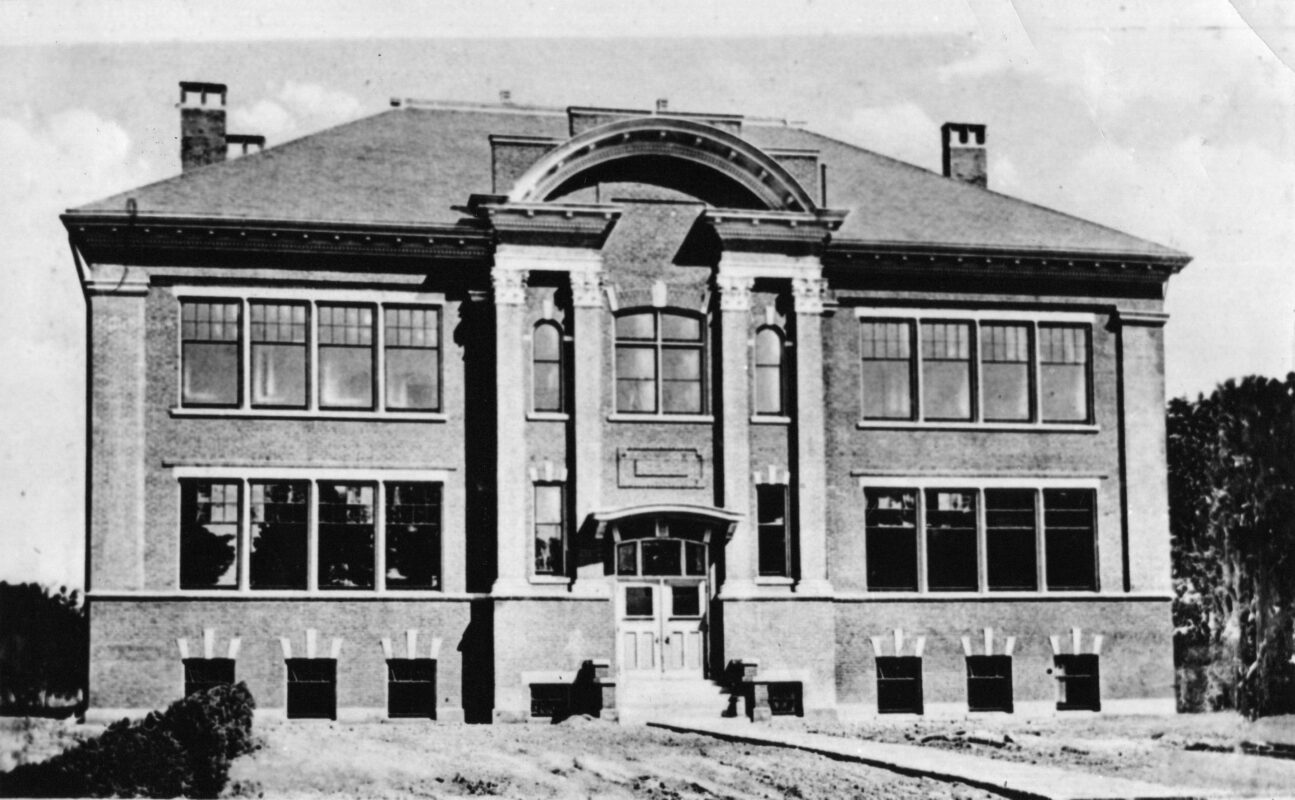 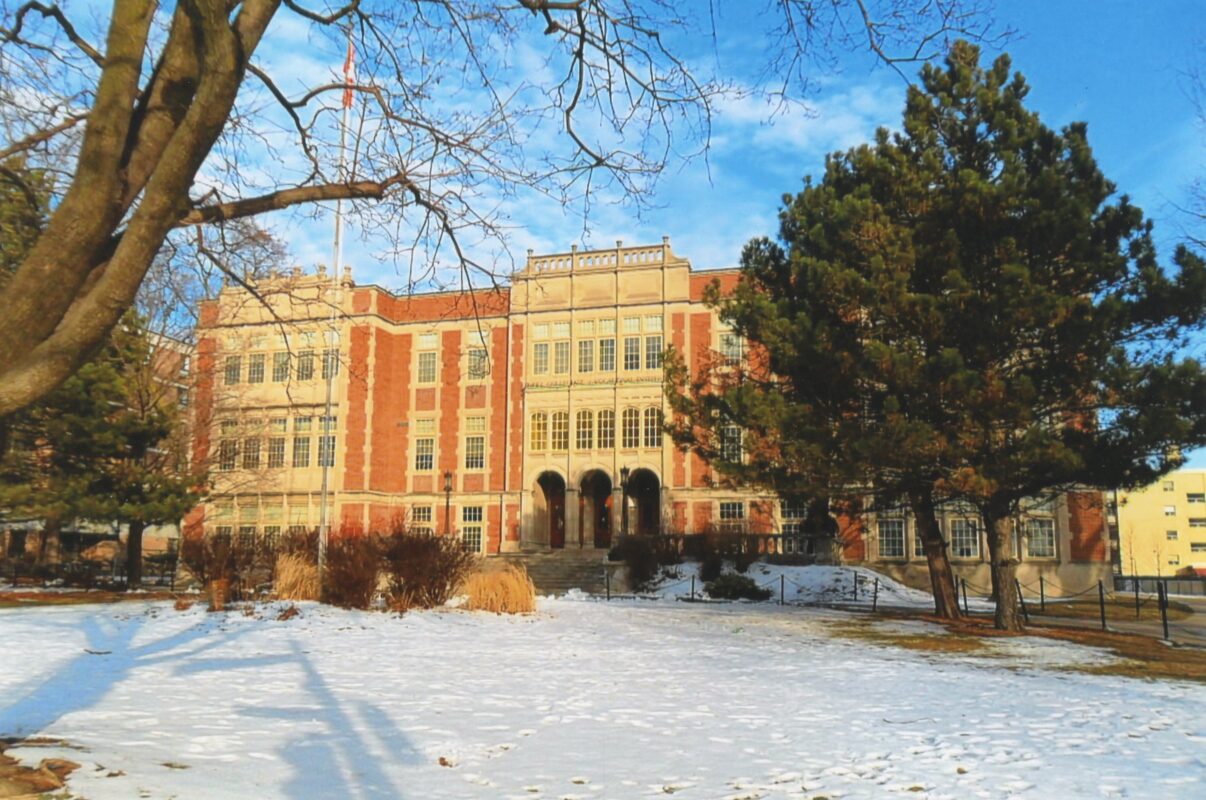 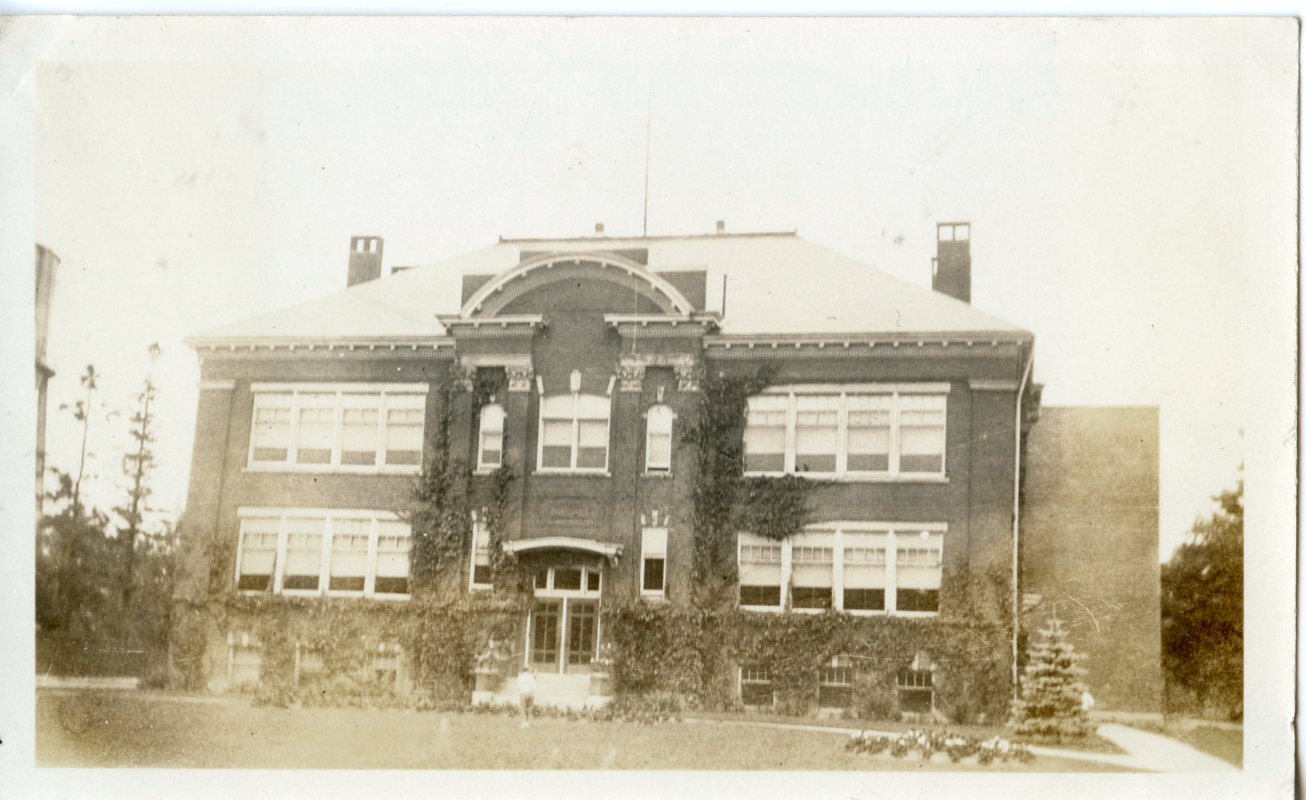 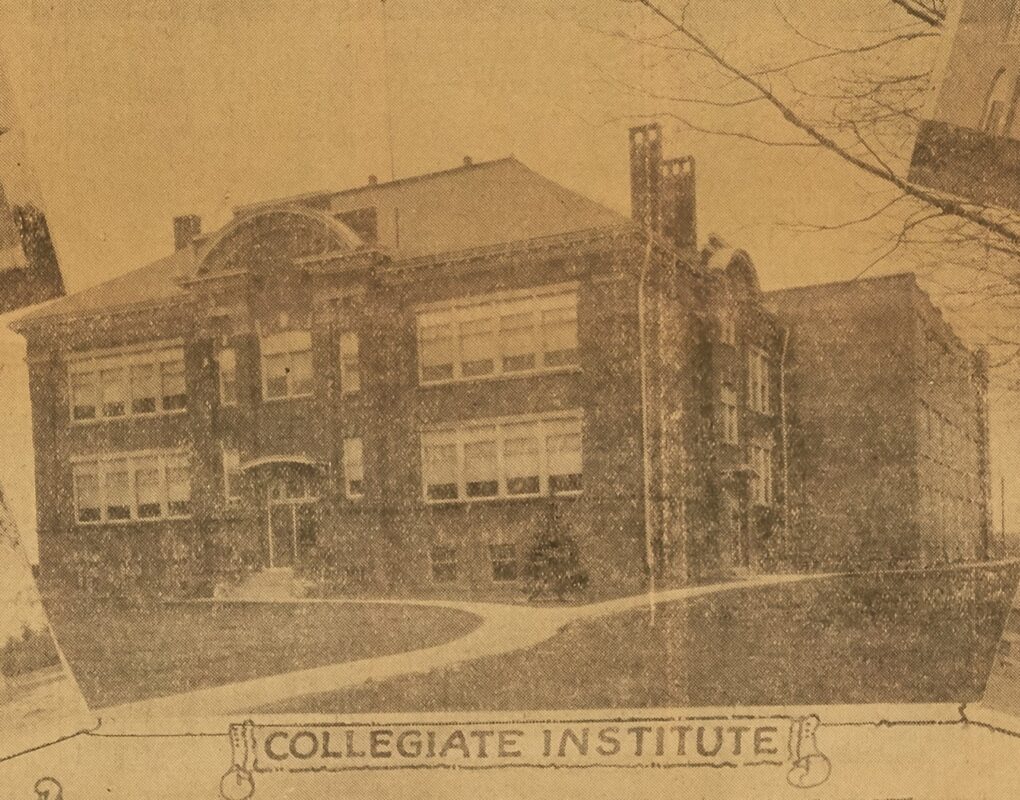 Oshawa’s first official High School was located at 301 Simcoe St. N. and opened its doors to the public in 1910. It was an immaculate structure comprised of imported stone and red brick. It was originally named Oshawa High School, and it accommodated the teen population of the Oshawa area.

The basement of the original school had a boy’s gym and a girl’s gym and a room that housed a large furnace and a coal bin. The first floor had seven rooms, three on the west side and four on the east side that were specifically designed to hold science instruction classes, general classes, a teacher’s room and a cloakroom. The second floor had eight rooms, four on each side. The first principal of this school was Mr. Lyman C. Smith.

By 1923, Oshawa’s population was growing rapidly. A result of this was that classroom space became terribly limited, and the school became more and more over-crowded. Portables were used to compensate for the increased number of students until a new addition could be added. A large auditorium, new science classrooms, and a gymnasium were added to the east side of the building. This addition fuelled the idea for the school to be renamed. In 1924, it became officially known as Oshawa Collegiate Institute.

The student enrolment continued to rise, and in 1926, the principal, Mr. O’Neill, recognized that more classrooms were required. It was rumoured that most people were in favour of a completely separate technical school at another location. This idea would solve the overcrowding and at the same time offer students another option in their education. It was Mr. O’Neill who first submitted the proposal to the Board of Education to combine a technical school and a collegiate. This proposal was accepted in 1929, the same year in which construction began once again on Oshawa Collegiate Institute.

Plans for the addition to the school were as follows: on the south side at the back of the school an industrial section was added, and opposite to that, on the north side of the building, a technical section was added. The plans were designed in such a way as to give the students at Oshawa Collegiate a chance to continue their education in a modern up-to-date environment. To accommodate this idea, the front of the school was demolished and a new entrance was constructed. This made room for a larger principal’s office and a new boardroom. It also allowed more room for a larger library and additional classrooms. On May 7, 1930, the school officially opened as Oshawa Collegiate and Vocational Institute.

During WWII, students at O.C.V.I. were very involved in the war effort. Many left their studies early to enlist in the war; those who didn’t helped fight the war from home. In the 1943-44 school years, students from O.C.V.I. sold over $40,000 worth of war bonds.  In October 1944, the school was awarded with a plaque from the Royal Canadian Air Force in recognition of the school raising almost $160,000 for the war effort.

In the late 1940s, overcrowding once again became a major problem in the school. In the 1948-49 school year, classes were held on Saturday to compensate for this problem. Just when it seemed that another expansion would be needed, plans for a new high school, Central Collegiate, were announced, and the overcrowding problem was solved in 1950.

In 1951, A.E. O’Neill ended his 25-year long run as principal.  He retired and left the impression of dignity and honour among the students and staff.  Mr. G.L. Roberts succeeded him as principal. Ten years after Mr. O’Neill’s retirement, a committee was established to re-name the school. In September 1962, it was decided that Oshawa C.V.I would formally and respectfully be changed to O’Neill Collegiate and Vocational Institute.

The school has gone through many changes to reach the point it is at today. The auditorium no longer has skylights, and the boy’s gym no longer has a running track around the top. There isn’t a separate entrance for the boys and girls. It is no longer the only high school in Oshawa; it now shares this title with four other public secondary schools and two Catholic secondary schools (as of 2021). Although these things are gone and O’Neill’s appearance cannot compete with the more up-to-date schools in the region, it holds many memories and traditions that the other schools do not. O’Neill will always hold a special place in Oshawa’s history and continue to play a part in its future. 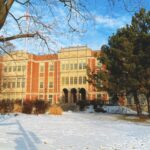 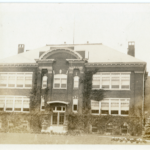 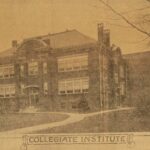 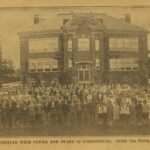