Parker Dye Works was a cleaning and laundering business, first established around 1876. The original owner was AH Parker, who in 1927 sold the business to Major HE (Bert) Smith. The original location was 38 Simcoe St N, but with the sale of the business later came expansion to a larger facility at 434 Simcoe Street South, with “modern and efficient machinery.” Their offices were located at 22 King Street East.

The new premises was described in 1928 as follows: “There are three sections to the plant, the front room where the goods will be sorted, routed, and invoiced, the second, the cleaning room, and the third, the shipping room.  Articles will not be lost in the routing, a motion which before sometimes could not be helped.” That year, they employed 12 people and boasted they were the only firm in Oshawa to carry fire insurance on customer’s items.

By 1930, Maj. Smith had the business name changed to Smith’s Cleaners and Dyers, but city directories show that by 1934, the premises at 434 Simcoe South was vacant. By 1936, it was once again occupied by a cleaning business, this time Pickwick Cleaners. It is unknown exactly when Pickwicks stopped operating.

Throughout the 2010s, this site was host to a variety of automotive supply/parts businesses, but by summer 2021, it appeared to be vacant. 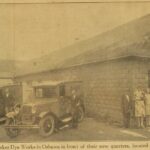