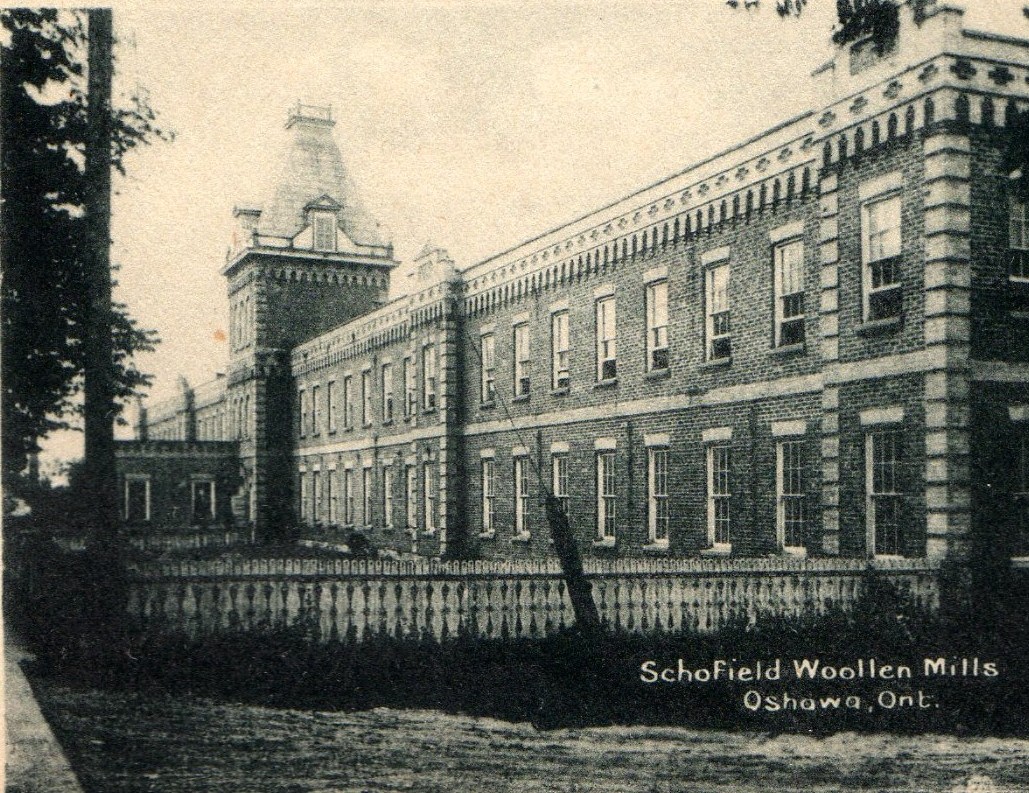 Schofield Woolen Mills was one of Oshawa’s leading industries.  The company was first established in 1892 by John Schofield who immigrated to Canada in 1860.  Schofield’s first mill, located in Paris, Ontario, was completely destroyed by fire.  At the time of this fire, a building in Oshawa at 372 Centre St. S. was for sale.  This prompted Schofield to visit Oshawa and buy this property, which was originally built as a hat factory and later used by Masson Manufacturing for the manufacturing of farm implements.  This building became the new home of Schofield Woolen Mills Ltd.

In 1896, the company was incorporated with John Schofield as President and his young son Charles Schofield as Secretary-Treasurer.  The company was organized with a capital stock of $40,000 to continue to enlarge the plant and the output.

The mill started off in a small way but eventually prospered.  In 1911, the company employed 100 women and 50 men.  The mill was two large brick factories completely equipped with modern machinery throughout.  The mill manufactured men’s underwear under the brand names of “Woolnap” and “St. George.”  The underwear was nationally recognized for its exceptional quality and for being made of 90% wool.

In 1918, Schofield passed away and the company was carried on by his son Charles.

In 1927, the production at the plant had grown from 30 dozen garments daily to 125 dozen garments daily.  The wool used in the garments arrived to the mill in 300 to 1000 pound bales.  First, the wool would go through a thorough scouring and cleaning before being carded and spun into yarn of different sizes and weights.  The yarn was then knitted on machinery, washed again and bleached, and then cut into garments.  After the garments were trimmed and finished, they were ready for market.  Although the company did not export many of their goods, their products could be found in nearly every town or city in Canada from coast to coast.

The Schofield Woolen Mills company produced large quantities of underwear for the men in the armed forces during World War II.

The factory saw a number of fires throughout its history.  For example, in 1941, the Oshawa Daily Times reported on a fire which started near the carding machines and remarked, “the fire was the second in the plant in two months.”

The mill continued to operate in Oshawa for several years but eventually closed down in 1951 upon the retirement of Charles Schofield.  He later died on December 29, 1954.  Several companies had operated from 372 Centre St. S since the woolen mill closed, and it remained an empty field for several years.  In the mid-2010s, Habitat for Humanity began their CentreTowne Build project which saw the construction of houses for 24 families on the site of the former mill. 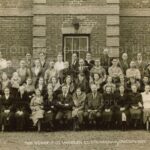