The Baseline school, Union School Section No. 4, was built in 1877.  It was located south of the 401 at the Oshawa/Whitby border, between Thickson and Thornton Roads.  At the time, Bloor Street was known as Base Line Road, hence the school’s name.   There was a school building in that area for over 110 years when in 1987, the building was demolished.

Olive French, a local amateur historian and author, asserted that there had been a school in some form in the Bloor/Thornton area since the mid-1800s.  In 1840, a school, most likely made of logs, was located on Lot 15 Broken Front Concession, and it was considered to be one of the outstanding schools of its day. Later, in 1852, a brick building was erected, located south and east of Bloor Street and Thornton Road.

In the early 1870s, school trustees for East Whitby Township began the process of building a new school house.  In 1872, two potential locations for the new school house were proposed; both locations were in the first concession, with the first being the southeast corner of Lot 17 and the second being the southwest corner of Lot 16.  The minutes of a special school meeting on March 21, 1873 show the trustees chose the southeast corner of lot 17, First Concession in the Township of East Whitby to be the location where the new school house was to be erected.  This motion was moved by Mr. L. Coryell and seconded by Mr.  E. Dearborn.  While it was decided on that a school house was to be built, it was “thought not advisable to build it this year [1873].”  In December of that year, $101.25 was paid to Daniel D. Slade for the land.  The school’s history progressed with the purchase of an old school house in 1874 for $27, and in 1877, the school board tendered a contract to build a brick school house for $725.

In 1938, another change occurred to the Baseline School.  With ramping up of Highway 401 through Oshawa, school trustees bought an acre lot for $300 across the street from where the building was located, and they moved the school to that site.  During the late 1940s, the school saw enrolment numbers decline, and the school was closed in the early 1950s.

In 1987, 110 years after its construction, the Baseline School was demolished.  The building was located on Canadian National Railway property, and CN at the time explained the removal, saying it was prone to vandalism, and because the Town of Whitby believed it to be an “eyesore.”  The demolition of the school was, unfortunately, the only feasible option CN had.  The president of the Oshawa Historical Society, Doris Kennedy, commented at the time that the building was “too far gone” and would not have survived relocation.  The OHS had looked into that option 20 years previously, however an architect had assessed the building and believed that relocation could not have been completed.

*address listed is for map plotting purposes, to show the approximate location of the school. 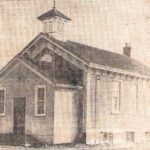