Bishop Bethune College was a private Anglican women’s college located in the house of former mayor T.N. Gibbs. It was opened in 1889 by Reverend Middleton of St. George’s Anglican Church, but after a few years the school struggled financially due to mismanagement. By autumn of 1892, the school was heavily in debt, and attendance had diminished. The school was offered to the Sisterhood of St. John the Divine, an Anglican nun’s order, and they took custody of the school for the 1893 winter semester.

Mother Foundress Hannah Coombes became the headmistress of the school, and after a period of renovation, the school was reopened under the sisters on February 9, 1893. The school opened with ten boarding students and six day students, the latter of which came from Oshawa.

In the nineteenth century, the school mainly focused on teaching languages (including Latin, French, and German), needlework, music, and art. Science wasn’t offered until later on in the 20th century. In 1898, a major expansion was added onto the school that included more rooms for the increased number of boarders that attended the school, as well as a chapel and musical practice rooms, which indicated a growing student body.

The school was renowned as a women’s college throughout the country; indeed, one of the most common places that students came from was Montreal. Sister Margaret, a member of the school’s trustee board, advertised the school greatly among upper class Montreal families, and the school continued to grow and flourish into the interwar period, as the sisters took less of a role in teaching, and instead educators were brought in from outside the order. This included foreign instructors from England, and this switch from strictly religious educators to general educators also introduced the teaching of sciences and math to the school.

In its time, the school was regarded as a very prestigious educational institution, but ultimately it was still a private school that relied upon tuition paid by the students who went there. When the Great Depression happened in 1929, the school lost a lot of its boarding and day students, due to the lack of funds. This trend would continue until 1932, when the school would eventually close due to it no longer being economically feasible to maintain. The building stood until it was knocked down some time later, and an adult education facility stands on its site now. 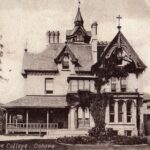