The group first met at the Polish Alliance Hall on Olive Avenue, and this served as their base of operations until 1968. In the late 1950s, 80 acres of farm land was purchased in north Oshawa; the land was to be used partly as a picnic area, but the long term plans were to eventually build a hall for the organization.

The Gen. W. Sikorski Polish Veterans’ Centre was officially opened on November 9, 1968, serving as headdquarters of the Association, as a banquet hall for community members, and, during Fiesta, as the Krakow pavilion, with food and shows taking place Monday to Friday during the annual event. The group was also active during World War II, hosting commemorative celebrations and fundraising initiatives. 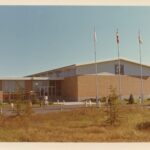