In 1954, the Oshawa Inter F.C. (Football Club) was founded for new Canadians who wished to have something to remind them of home. Later changed to Oshawa Italia F.C., the team played Vancouver during the Canada Cup finals.

In 1966, two local clubs were founded: the Oshawa Italia Club and The Italian Social and Recreation Club of Oshawa. Frank Politano and Vittoria Coscarella were the respective first presidents. Colonel Sam McLaughlin was the Honourary Chairman. The two clubs came together to support victims of flooding and earthquakes in Florence and Sicily, and after working so well together, the two clubs merged and received a Charter on July 11. 1967. On August 13, the Oshawa Italian Recreation Club was officially founded.

The main ambition of the club was to keep the Italian community together and to hold tradition to its ethnic background. They joined the Oshawa Folk Arts Council and founded a second soccer team, the Oshawa Azzurri. It was also at this time that Italian language courses were being offered at Holy Cross Catholic School. A theatre group was founded, who performed as far away as Kingston. The late 1970s saw the establishment of a half hour television show on local TV as well as women’s group. In the 1990s, the Club became more active in Durham Region, creating more connections and successful fundraisers.

The building in which the Club is located is now known as the “Italian Cultural Centre of Durham.” Renovations to update the hall, washrooms, h-vac and administration office have been completed through the years. 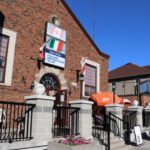