The building currently occupied by the Canadian Automotive Museum has a long history.

The site next had a brief stint as the City Relief department, an institution to aid those effected by the Great Depression. Following that, in 1935 the property was acquired by the Anglo-Canadian Drug Company which would operate it for nearly 30 years.

In 1962 the site was acquired by the Oshawa Chamber of Commerce, which intended to keep a portion of the building for its own use and establish the Canadian Automotive Museum in the remainder. Both portions would commence operation in 1963. The Chamber of Commerce would relocate in 1973, and Shiloh Shop Christian Supplies took its place, joined briefly by a Hallmark Camera and Supplies outlet.

In 1982 the entire building at last came under the control of the Canadian Automotive museum. Despite changing hands so many times the site retains the architecture of the 1920s automobile dealership, quite complimentary to its current role. Today the museum features a vast collection of 90 vehicles, almost evenly split between foreign and domestic models, as well as a reference library.

One of the Museum’s former presidents, Herbert Robinson, had worked for Ontario Motor Sales. 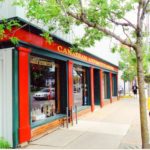