The Oshawa Bakery was founded in 1920 by Fred and Mary Shelenkoff, immigrants who had arrived in Montreal from Russia after World War I. Soon afterwards, they moved to Oshawa where they founded the Oshawa Bakery on the corner of Stacey and Court Streets. There they had the space to keep a stable – for their delivery horses – and sheds full of other farm animals. The business grew as steadily as the city around them, allowing the business to move to Olive Avenue – across from where St. Hedwig’s Polish Catholic Church would eventually stand. The Shelenkoffs had five children, and each of them would help out in the bakery from a very young age.

During the Great Depression of the 1930s, the bakery faced hard times. However, it also managed to give back to the community. Since they were located close to the Canadian Pacific Railway tracks, they would offer fresh bread to impoverished travellers who would often stop on their way through the town. Additionally, the Shelenkoffs arranged to sell their bread for below the cost of production for two hours each day in retail stores in areas of the city most heavily affected by the Depression.

Until the 1970s, the bakery had door-to-door delivery, reserving eight wagons for this purpose. The business progressively expanded, employing thirty-five full- and part-time bakers and office staff in the year 1980. Throughout the decades, the bakery was kept in the family. It closed in 1990 when two of the Shelenkoff children were too old to be involved any longer.

The Oshawa Bakery, specializing in Eastern European baked goods, served as a community hub and a neighbourhood landmark for over half a century. 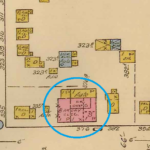